My interest in duck calling began when I was about twenty years old. My dad and brother have always been great callers so that always intimidated me. Anytime I tried to blow one of their calls I would immediately become frustrated because I did not sound anything like them, or even a duck. I realized I could not push as much air through the call like they did. I was also really shy and did not like calling in front of people because I was afraid of messing up and I would get embarrassed.

My duck calling journey was brought to the next level in 2014 when Maverick Dunn gave me my first call. I met him at his Dunn Callin’ booth at an Outdoors Expo in Conway, Arkansas. There I found a call that I could finally make a decent sound on. After talking with him about my struggles learning to call he casually slipped a call into a little black bag and politely handed it to me saying, “it’s yours.” No one had ever done this for me before and I was overjoyed. Thank you Maverick!

At the time I did not realize how important of a moment that exchange actually was. It is almost impossible to learn how to call on a call that is not cut properly for you and your own individual needs. This is a crucial first step into finding your own tone.

After having a duck call tuned specifically for me I was able to better advance my skills. The only thing holding me back was my lack of confidence, which caused me to become embarrassed when it came time to practice in the duck blind. I could call in the car by myself all day but as soon as I was in front of other people I clammed up. This one one of my hardest battles to overcome. It was not that the people I was around were judging me but I was internally bullying myself for not having it right.

It was not until 2015 that I was able to overcome this major block in my journey. I was determined to learn how to call and nothing, especially myself, was stopping me. I went hunting with my dad and we would work on it together. I would mimic his calling and learn the correct timing and sequences when working a group of ducks.

I am not an expert but there is a lot more that goes into calling than one would think. I started off only using the feeding call when the ducks were working in close to the decoys. What works best for me is to say “tika tika tika” and “digga digga digga” intermittently. Gradually as I got more comfortable with my calling abilities I would throw in a couple quacks which is the basis for all other calls. I like to say “hut” as I blow into my call. It also helped me to blow through the back of the call to learn how to push air through it correctly. Then I began to add a greeting call which strings a series of 5-7 quacks together starting off longer and ending shorter. 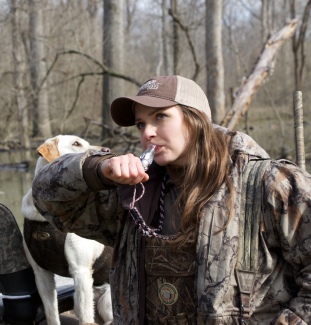 This is how I progressively worked myself into calling ducks. When you see a group flying you actually begin with whatever call best fits the situation typically the greeting call then add in other calls like single quacks, feeding, comeback, or hail calls when necessary. There are different inflections you can create to sound like a lonesome hen or a pleading hen as well along with many other options.

I am not saying this is the only way to start learning how to call. There are many different ways to make it to the same goal. I also added another call to my arsenal to be louder and raspier which works better in the timber. I purchased a RNT call that I am very happy with and will write more on that one later! It is common for a duck hunter to have multiple calls on their lanyards for the various types of situations encountered while duck hunting.